Kings slump to first defeat of the season 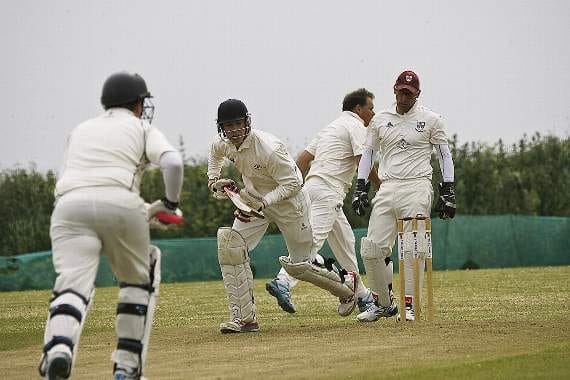 Kingsbridge 1st XI 57 all out,

Saturday saw Lewdown, who had dropped two divisions due to having no second team, come to the Butts.

Against the first team to bowl well against them, Kingsbridge’s wheels came off. Fielding was excellent, as was the slip catching. Ford and Ford put on 15 for the first wicket against the swinging ball.

This became 22 for 5 in no time as wickets tumbled. Appa was unlucky to be given LBW, but five batsmen were bowled, four caught between wicketkeeper and second slip. 42 for 9 was dire but at least Peach and Robinson also put on 15 for the last wicket to hoist Kings to a paltry 57 all out.

An uphill battle was on the cards and so it proved to be. Peach took an early wicket to leave the visitors 16-1, but Creasey, with four fours and a six, finished the game. Two wickets fell with the score on 52, but Kings lost by seven wickets.

Next week sees Shaldon at the Butts and a much-improved performance required.

What a different a week makes.

Kings travelled to Plymouth on Saturday, won the toss and batted on a lively track. Chandler and Hammett opened the batting but didn’t trouble the scoreboard for long, both being out cheaply.

Ellis made inroads and scored at a steady pace, looking very comfortable with young Ben Grose.

With the best ball of the innings, Grose was bowled with a delivery that pitched outside off stump, swung and nipped back in to take his off stump out. Clark and Ellis dug in well but couldn’t get the runs that were needed to put a good score on the board.

After tea Kings knew that early wickets were key and that they would also need to keep the extras down.

Edmonds started where he left off last week, swinging the ball miles. He took the first three wickets easily, one of them a great catch from wicketkeeper Chandler, who was going the wrong way but stuck out a hand to take the catch.

Hammett kept the score down from his end to back up Edmonds.

Hammett was replaced by Perkin and finally, in the last over of his eight-over spell, Edmonds took his fifth wicket, leaving him excellent figures of 5-18.

Clark replaced Edmonds and the at the other end Hammett mixed the bowlers up to keep the batsmen thinking but to no avail. The only bowler from that end who got stuck in was Grose, who bowled tidily.

In the end wides and a few boundaries killed the game off for the Ks, as Plymouth made 138-7 in 34.3 overs.

The Kings second XI will be looking to bounce back this week away at Yelverton.