Kings too strong for Abbots 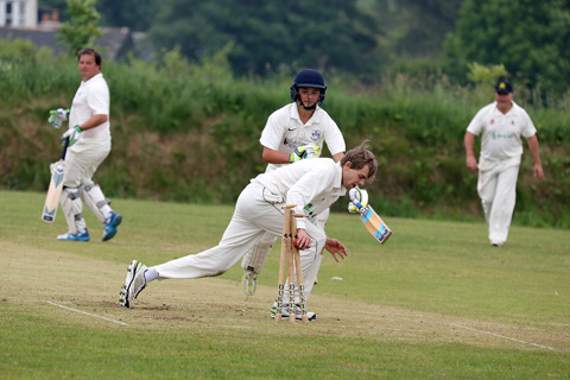 After a dry couple of weeks Thursday and Fri­day saw rain, with Kings­bridge Cricket Club’s new covers received (thanks to a grant from the ECB) but not yet operational.

Kings got off to a flyer as overseas opening bowler Small-Boyce struggled with the slopes and West­lake punishing the no balls and resulting free hits.

Westlake raced to 63 (from 44 balls with 11 fours and one six) and Kings to 80 in 10 overs before the introduction of spin saw Westlake bowled when a century-plus looked on the cards.

Kingsbridge then suffered a mini-collapse, losing five wickets for 24 runs in seven overs as the wheels fell off to leave them 104-5.

With 28 overs remaining consolidation was needed as a big score was still on the cards.

Rosewarne joined De Silva as the pair put on 51 runs in 13 overs before Rose­warne was caught for 22. De Silva then misjudged a slower ball and was also caught for a fluent 36.

With the score at 162-7 with 13 to go, this still should have meant 200-plus was on the cards if the tail batted properly, but unfortunately they didn’t and Kings were all out for an under-par 180 with eight overs remaining.

Abbots were confident of knocking off the runs having posted over 400 the previous week.

Peach and Rose­warne had different ideas, though, as they reduced Abbots to 59-5 using the conditions well and backed up by some good catching.

Peach finished his spell with 3-31 from his nine overs. De Silva was miserly from one end and 15-year-old left-arm spinner Olly Rob­inson chipped in with 2-29 from six overs. At 88-8 it looked game over.

Small-Boyce then took the attack to Kings, aided by a dropped catch off the returning Rosewarne. He moved to 56 as 54 was put on for the ninth wicket.

Westlake had returned to the attack and he capped a fine day by taking the last two wickets with the score on 142 as Kings won by 38 runs and he finished with 3-22 from his seven overs.