Kings at the double yet again to keep sensational start going 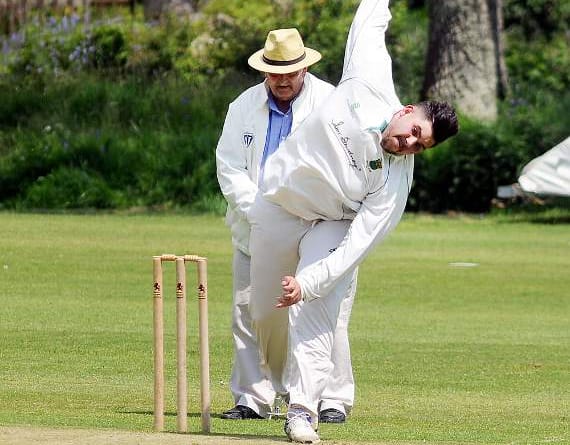 James Richardfson sends down a delivery for Cornwood

On a lovely day at Cornwood’s Oak Park ground, Kingsbridge lost the toss and were put into bat.

With captain and vice captain out, Kingsbridge had four changes from the previous week. A strong batting performance was required.

Ford and Ford again produced a good opening stand, putting on 70 for the first wicket before Freddie was run out for 38. Fletcher (41) and Appa (38) put on 95 for the second as Kingsbridge amassed 254 for 5, helped by a sprinkling of 68 extras.

Piddock then settled in for Cornwood, helped by a couple of missed chances, moving to 102 not out as the pitch eased and Kings found further wickets difficult to come by. A run out and 1 for 24 for Robinson off his nine overs saw Cornwood finish eight wickets down and lose by 57 runs.

The previous week was the first home game for Kings first XI, who welcomed Chagford to the Butts.

The weather was clear but chilly. Kingsbridge won the toss and batted, making hay while the sun shone.

Ford and Ford put on over 100 for the first wicket before Spike departed for 38.

Freddie passed 50 before being bowled on 58. Fletcher again looked good before departing in the 20s, but it was left to Ash Treeby to blast Kings to 277 for 8 with 78.

Chagford were never really in the hunt; Peach, opening the bowling, took 3 for 11 from his nine overs. De Silva took 4 for 21 from six overs, Rhymes chipped in with two in two balls and Freddie Ford claimed one as Chagford were dismissed for 102.

Kings lost the toss and were asked to bat.

John Hardy and Aaron Chandler opened the batting and scored quickly to start with but Hardy fell with the score 32–1. James Ellis came and went ,unfortunately triggered LBW.

Young and upcoming star Ben Grose looked in great touch, seeing off the new ball, but was ran out terribly by his mate Chandler. This brought lefty Ed Church in, who didn’t seem himself; boundaries dried up for 10 overs and at drinks the score was 82-3.

Hammett came in with Edmonds, who fell three balls late for a duck.

Perkin and Hammett had to make sure with five overs left that they didn’t lose a wicket and to make 200 plus, to get maximum batting points.

Perkin, with a one-handed shot, scored a lovely four down to the boundary and Hammett hit a big six into the road and a four to make it 199-7 and with the last ball, they scored a single to make it 200-7. Really, though, the team should have scored 250-plus.

After tea Hammett and Edmonds opened the bowling with great success, Hammett picked up a wicket and Edmonds took 4-36, reducing Paignton to 47-5.

Clark replaced Hammett and young Ben Baldry took Edmonds’s place, with Clark taking the remaining wickets to finish with 4-15, bowling the 10 men of Paignton out before drinks.

That’s three weeks on the trot Kings have bowled a side in 19th over.

This weeks sees the Kings go to a struggling Plymouth side at Plymouth Colege.

The week before, on a cloudy but warm day at Chudleigh, Kings won the toss and put Chudleigh into bat, on a wet wicket.

Edmonds and Baldry opened the bowling with great success, between them taking five wickets, Edmonds with 3-29 from eight overs and Baldry 2-12 from six.

Hammett replaced Baldry with no luck, which saw Clark and Olly bowl, each only bowling three overs, Clark taking 4-13 and Robinson 1-3.

Chudleigh weren’t that great with the bat, swinging for everything from ball one, and Kings bowled them out for 74 after 22.1 overs.

Easy, you would think, to chase down, but it was nail-biting for the first 10 overs

King’s were 11-3 at one stage, with Chandler (1) caught behind, Ellis (0) trapped LBW and Steve Edmonds (6) given out via a dodgy LBW decision.

This saw Mark Edmonds and Ed Church at the crease, and they pushed very hard on the running and put Chudleigh back under pressure.

After tea both batsmen made sure they stayed in but got runs when they could, finally Edmonds fell on a well-earned 28, putting on a 46 partnership with Church.

With 18 runs left to get, Clark and Church got the runs to win the game.

A total of 19 points were picked up, after the week before getting 20 points.