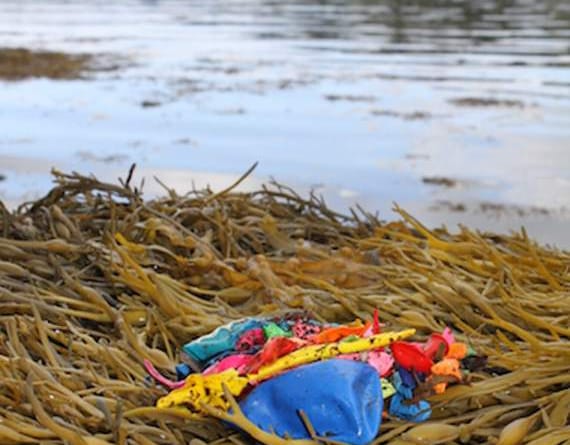 Results of a beach clean in Salcombe on Saturday, September 16

Plastic waste damages the waters and wildlife of Salcombe estuary.

A local woman, Anna Turns is trying to save the beautiful area we live in from the dangers of plastic waste reaching our coastal waters. Her campaign is in its early stages but positively expanding as she searches for volunteers to offer support. Her passion and enthusiasm for this cause is inspiring as she attempts to unite Salcombe together against the plastics industry and society’s current throwaway mentality.

In total 300 million tonnes of plastic are produced every year but every piece that has ever been produced is still among us. Plastic never properly biodegrades, instead it just gradually fragments and gets smaller. In total eight million tonnes of plastic reaches our seas every year from the land. From this, 50% of all marine litter globally is made up of single use plastic items or fragments of these items. Looking forward, the Ellen Macarthur Foundation which works with businesses, government and academia to build an economy that is restorative and regenerative, estimates that by 2050 there will be more plastic in the sea than fish.

Salcombe experiences plastic pollution but Turns wants to stress that we can all help prevent this. The beautiful old seaside town has been classified as an eco-port by the European Sea Port organisation in 2014, something that Turns believes Salcombe does not live up to right now, but with positive work it could be.

Her aim is to: “celebrate the people and businesses who are are using single-use plastics responsibly and putting positive initiatives into place.

“I want to find cafes, hotels and restaurants that are using alternatives to plastic disposables or rewarding their customers with a discount if they bring their own cup for a takeaway coffee, for example.”

Her campaign doesn’t involve banning anything, but she has lots of ideas for upbeat alternatives.

“Staff can think twice before putting a straw in every drink served and just provide one if the customer requests one, or perhaps hold back from using lids on takeaway coffee cups unless absolutely necessary.”

She is developing this campaign over the winter months, meeting with business owners before the busier season begins. So hopefully by spring, more companies will be on board with the scheme and locals and holidaymakers engaged with the project.

Part of the passion for this venture comes from her six year old daughter, Ella who has joined the Kids Against Plastic campaign. Started up by two sisters aged 11 and 13 called Ella and Amy Meek, the campaign enables adults and children to inform people about the issues with throwing plastics into the sea. They highlight the four big main types of single-use plastics that they urge can easily be reduced: plastic bags, plastic bottles, coffee cup takeaway lids and straws. Influenced by the success of this campaign, the Fortescue Inn at Salcombe has recently been awarded with the town’s first ever Plastic Clever Award. The owner, David Moxham uses compostable straws, wooden stirrers and non-plastic alternatives for takeaway disposables.

The main action that inspired this great work from Turns occurred during Salcombe Town Regatta Week during the crabbers race. Many people were throwing water balloons, which regrettably and unfortunately end up in the estuary and consequently have been washed up on many of the beaches surrounding Salcombe. This not only damages the appearance of the the estuary that so many people rely on for pleasure and their livelihoods but also creates great health risks for the local wildlife living there. Turns was increasingly frustrated by this due to her previous work whilst helping her husband run Whitestrand Boat Hire company ten years ago. They worked together to change the harbour byelaws to ban anything including water balloons being thrown into the estuary which she hoped was being enforced. However, many balloons were thrown in the waters at this years regatta.

Turns explains how: “Even biodegradable water balloons do not biodegrade in the sea-they need heat to decompose and so fragments of so-called biodegradable balloons are still a huge hazard.

“In fact, I collected 98 fragments of water balloons within just one hour on Ox Bay just a few days ago-that is five weeks after regatta and that’s just one beach within the entire estuary.”

To resolve this issue, Turns suggests that instead people could use super-soakers: “I don’t want to be a killjoy but we need to find fun alternatives that don’t impact our estuary, it’s just not ok to throw plastic directly into the sea.”

For this, funding would be needed to buy a number of them which could then be distributed out for the regatta each year.

Additionally, in the wake of her mission she is searching for more sponsorship to increase the out reach of her own campaign. Additionally, she hopes to talk to local people, organisations, business owners and school children alike to spread her environmental message. If anyone is interested you can get in touch via this email mailto:[email protected] or on the Facebook page Make Salcombe #PlasticClever. So, look out for her around Salcombe and if anyone would like to learn more or get involved in the campaign she would love to hear from you.