Town left to rue what might have been after draw 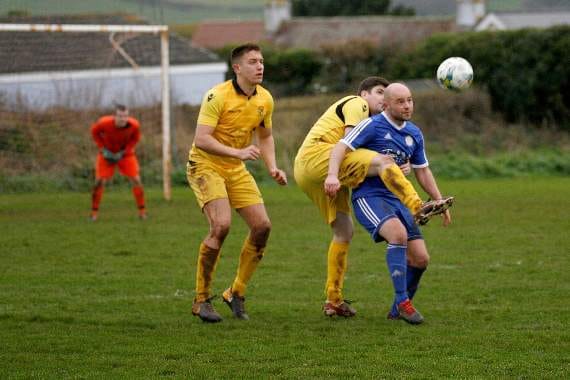 Charlie Barnes is all wrapped up

Salcombe returned to league action after the long Christmas break with an entertaining draw against a well-drilled Buckland side.

With the pitch heavy after recent rain, it was clear that this was going to be a day for the long ball with Town hoping to utilise the speed of their forward line.

It was Buckland who struck first, though, with a fierce shot from outside the penalty area giving ‘keeper Grewal no chance of stopping it.

Salcombe had opportunities to get back on terms with Charlie Barnes chipping over after being one-on-one with the Buckland ‘keeper.

However, things looked desperate for Town when Buckland went further ahead after poor marking allowed them to score with a free header from a corner.

Salcombe grabbed a lifeline on the half-hour mark when Barnes jinked past several defenders with a mazy run in the penalty area to pull one back.

It was all Town now and the equaliser came shortly afterwards when Olly Stallard flicked the ball home from close range.

Salcombe now looked to get themselves in front before half time and Stallard looked odds on to get his second when he broke through with only the ‘keeper to beat, but he elected to pass and the chance was lost.

Josh Harris also went close with a free kick but the best chance came just before the break, when another run from Barnes saw him brought down for a clear penalty. Ashley Yeoman stepped up and hit it low to the right but the ‘keeper went full length to turn it round the post.

This was pretty much the last action of an entertaining half where, despite fighting back from two down, Town were disappointed not to go into the break with the lead.

Buckland started the second half with a period of consistent pressure on the Salcombe defence, but the back three of Will Giffen, Luke Milton and Matt Thorn held firm to keep things level.

Town gradually got themselves back into the game and began to create the better chances, with Barnes causing numerous problems for the Buckland defenders.

Salcombe finally took a deserved lead on the hour mark when Yeoman found Stallard on the left and he played the ball back in for Yeoman, who beat the ‘keeper with a low shot from 10 yards out.

Town now went looking for the goal which would make the game safe, and with Ryan Colmer brought on to add pace down the right, chances came but could not be converted.

Buckland were not really threatening at the other end but deep into injury time and just as it looked as if the points were secure, the equaliser came.

With Town looking to hold play in their opponents’ half the ball was lost Buckland broke quickly , with the goal tapped in unopposed at the far post.

This was the last action of the game leaving Town unhappy to concede at the end of what seemed a generous amount of injury time.

This was a game in which both sides were frustrated to surrender leads but Salcombe should really have managed to see out the game and get the win their attacking play deserved.

Town have another chance to get their first win of 2018 when they entertain Ipplepen Athletic at Malborough tomorrow, with a 2.30pm kick off scheduled.