Leaders Salcombe held to a draw 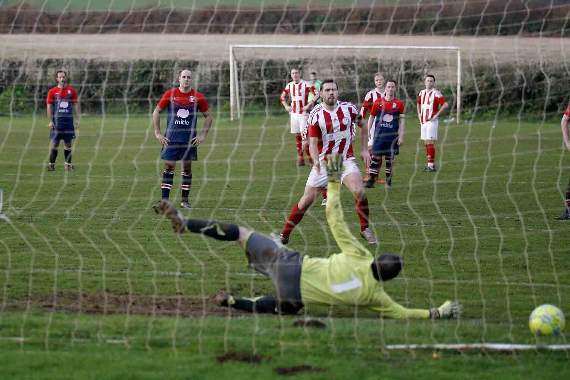 Salcombe drew their last game of the year away to Stoke Gabriel to extend their unbeaten run to eight games.

This was a far harder game than the home fixture, with the opposition raising their game against the league leaders.

Salcombe started well playing down the slope, with Callum Nol­an and Harrison Ward causing the Stoke de­fence problems down the wings and Charlie Barnes and Ashley Yeoman looking lively up front.

It was Stoke, though, who took the lead midway through the first half when an a forward outpaced the Town defence.

Salcombe continued to press and were re­warded when Angus Johnstone lost his marker to head home a free kick from wide on the left.

With both sides now looking to grab the initiative as the game approached half time, some robust tackles began to fly. Neither side could break the deadlock, though, and the half ended with matters all square.

With Town playing up the slope in the second half a tough battle was expected; however, Salcombe looked the more dangerous, with the pace of Yeoman and Barnes causing the slower Stoke defence numerous problems.

With Barnes being constantly brought down, it was no surprise when Salcombe won a penalty midway through the half, Yeoman stepping up to tuck the ball low in to the corner of the net to give his side the lead for the first time in the match.

Town knew they needed a third to make the game safe and continued to press.

Stoke, however, were beginning to get back into the game and won a penalty of their own when ‘keeper Ewan Grewal was adjudged to have brought down a home forward.

The chance was duly converted to level the game.

With 15 minutes left there was still time for a winner and while both sides had further chances, in the end, a draw was a fair result on the balance of play.

With both sides giving 100 per cent it would have been hard on either team to have lost.

Salcombe now have a break until games resume on January 7 with an away fixture at Waldon Athletic re­serves.

The club would like to thank Salcombe Brewery for their generous support and wish all sponsors and supporters a merry Christ­mas and happy new year.