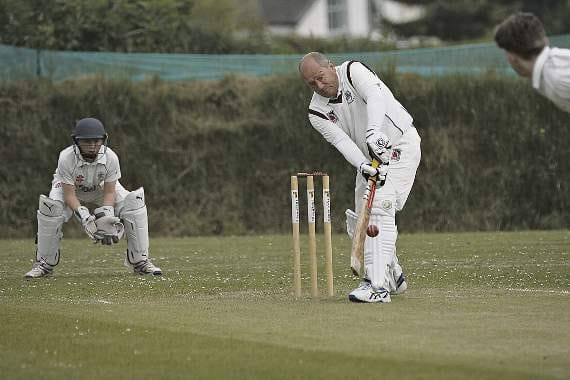 Kingsbridge seconds’ John Hardy tucks one off his legs

Kingsbridge lost the toss and were put into bat on a sweltering day.

The pitch was a little lively and the openers Freddie Ford and James Fletcher found run scoring against the opening bowlers difficult.

However, they showed good patience to hang in and began to score, eventually putting on 119 in 26 overs for the first wicket. Unfortunately both were out on that total, Fletcher caught for a fine 64 and Ford run out for a well made 45.

It wasn’t an easy pitch to score from ball one and Kingsbridge should have made well over but batsmen got starts and then got out. Matt Grose having to retire hurt with a pulled calf didn’t help and the next best score was 23 extras as Kings totalled 203 all out.

Kingsbridge knew they would be up against it as wicketkeeper Grose couldn’t field. Treeby took over behind the stumps but Kings only had 10 fielders.

A run out plus Peach and De Silva got Kings in the hunt at 48 for 4. The pitch, though, began playing better and Kings’ bowling then began to leak a few too many extras as the missing fielder proved important.

De Silva produced a a fine performance to earn figures of 5 for 23 and Peach 2 for 33 but the total climbed nevertheless, with 41 extras helping. When the ninth wicket fell on 194 Kings hopes were up but it was not to be as they lost by one wicket.

Shaldon Optimists second XI 143 all out;

Kings won the toss for this game and went into bat, with runs coming easily for the Kings.

Hardy scored 22 in 29 balls before being bowled before Sutton and Chandler pushed the score on. In only 32 balls Sutton reached his 50, but looking good with the bat he fell on 68.

Chandler finally fell for 42 and an over later Ellis was bowled for 39. Edmonds made 15 off just nine balls before Clark and Hammett took the score up 263-6 after 40 overs.

After tea Rhymes and Edmonds opened the bowling.

Edmonds got smacked to all parts of the ground as the batsmen seemed to like his bowling.

The other end saw Rhymes bowl tightly and after his seven-over spell he ended up with 2-34. Hammett didn’t get going so Clark replaced him and the man of the hour Ben Grose, coming back from a five-wicket haul the week before, replaced Rhymes and yet again took five wickets for only 24 runs.

Clark finished the game off thanks to a spectacular one-handed catch on the boundary by Ben Taylor, leaving Clark with 2-17 and Kings bowling out Shaldon for 143 in just 27 overs.

Kingsbridge are still second in the league, two points behind Ashburton.

Next week Kingsbridge host Dartington and Totnes at the Butts.