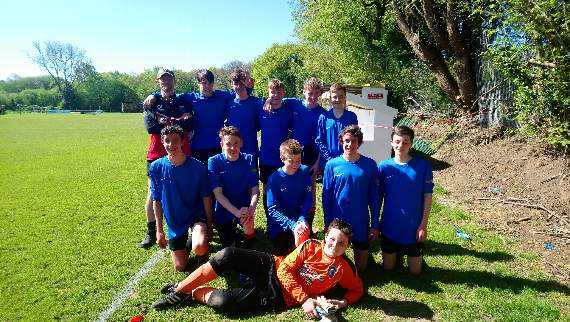 In their final game of the season KM hoped to finish on a high. The perfect start came after five minutes, Frasers’ corner met by Charlie’s well-placed header.

KM tried to capitalise, with Harry and Dan in midfield breaking up the home side’s possession and Tom M and Tom H constantly testing their defence.

Alfie and Euan contained any Kingsteignton threat in attack, with Lewis and Louis producing some excellent early forays into their opponents’ half.

However, KM failed to turn their possession into goals and the home side eased their way back into the game.

Richie pulled off two top-class saves but eventually a mix-up in defence produced a tap-in for the home side, resulting in a 1-1 scoreline at half time.

KM began the second half with renewed purpose and once again grabbed an early goal when Charlie surged past the Kingsteignton defence and fired past the ‘keeper. Tom M added a third when he robbed the home defender and struck a fine shot into the top corner.

Kingsteignton continued to press and almost pulled one back from a penalty, only to see Richie pull off a fantastic save.

KM broke with increased precision and were rewarded when Tom H volleyed home from Dan’s corner. Tom H added a fifth when he beat the tiring home defence to crash the ball home.

The icing on the cake was a break from defence, Lewis running almost the length of the pitch leaving the home side in his wake and calmly slotting the ball past the ‘keeper in the last minute of the match.

KM finish the season in a respectable fourth place; the team spirit and effort shown in the last three matches bodes well for next season.