Ally back to winning ways with four-goal showing 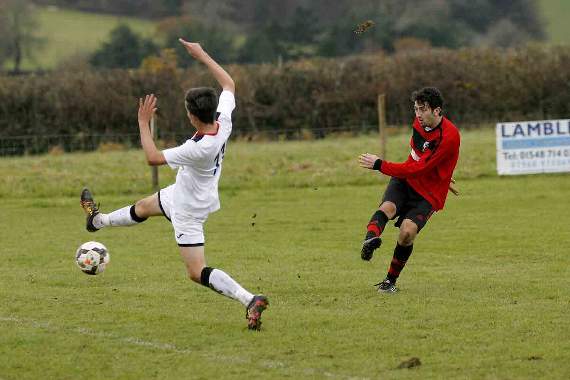 East Allington put in the perfect response to last week’s below-par performance with an excellent 4-1 win at home to Ipplepen Athletic.

Right from the first whistle, the attitude and commitment was spot on as they took the game to the visitors.

The first 45 minutes saw Allington create chance after chance and but for hitting the woodwork on a few occasions, some world-class saves from the away side’s ‘keeper and wayward finishing, they could have been six or seven up at half-time.

Allington’s goalkeeper Richard Teague had to make only one smart save after a defensive mix-up. They did however go in at the break with a healthy and deserved 3-0 lead.

Goalscoring midfielder Tom Rowdon opened the scoring around the quarter of an hour mark, firing home a sweet left-footed strike into the roof of the net from about 15 yards out.

It was 2-0 shortly after when the excellent Josh Pascoe, who had a great game, advanced forward from full-back and burst into the box to smash the ball home into the top corner.

Captain Si Hanna­ford got a deserved goal just before half-time to make it 3-0, applying the finish after an initial shot was saved.

They suffered a blow early in the second half, losing centre-back Tom Harvey with a groin injury.

This meant a reshuffle, with Andy King having to slot into left-back, Jamie Batch­elor reverting to his more favoured centre-back role to partner Dan Bowles and Lee Mor­gan coming on to play in the front three.

Allington lost a bit of rhythm in their passing in an attacking sense but controlled the game well, limiting Ipplepen to a couple of half-chances.

They suffered a second blow when with 20 minutes left Andy King was sent off for an over-zealous tackle in his eagerness to win the ball back for his team.

This meant another reshuffle with the im­pressive Tom Rowdon moving to left-back and Si Hannaford and Ben Robey dropping into midfield to support the hardworking Andy Davis and Matt Price.

With five minutes left an excellent kick from Richard Teague found Si Hannaford in space on the right wing and he supplied the perfect cross for Lee Morgan to convert with a tidy finish for his first league goal for the club.

With the last kick of the game, Allington annoyingly conceded a sloppy goal when they failed to deal with a corner to stop them from keeping the clean sheet they deserved.

All in all, though, a much-improved performance from the Pirates and a welcome and much-needed three points.

Unfortunately, the reserves again struggled for numbers having to start the game away at Chudleigh Athletic reserves, with 10 players and playing outfield player Jake Langman in goal (who did save a penalty!).

It also didn’t help their cause that Chud­leigh were boosted by first-team players and they eventually went down 7-1, Kris Attiwell with the goal.

The club would like to thank the Dog Lodge Slapton for being this week’s sponsor.