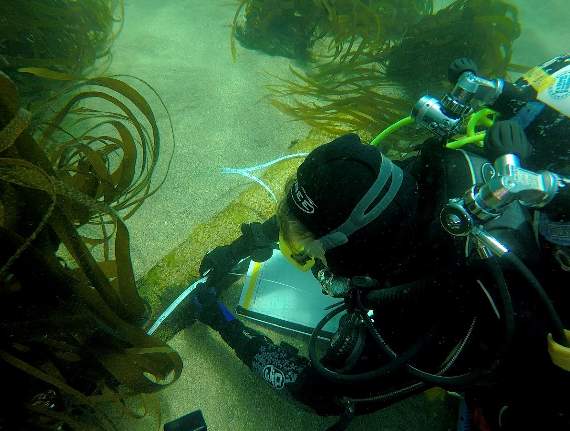 Measuring the cannon on The Dragon, a British West Indiaman ship which sank in 1757

SHIPWRECKS between Start Point and Prawle Point have been mapped with the use of a drone, earning the team a royal award.

They used video drones to trace sixty shipwrecks lost off the south Devon coast, as much of the coast is inaccessible.

Steve, 69, began diving in 1966 and remains president of Reading Sub Aqua Club, despite having to stop diving in recent years, due to a heart condition.

But Neville passed away in 2015, and Steve has carried on his work to discover the rest of the wrecks along the coast where they loved to dive.

Among the wrecks they photographed was the tea clipper The Gossamer, which sank in 1868 with the loss of 13 crew and passengers, including her captain and his wife, who he had married just a month earlier.

The team used magnetic imaging to pinpoint the exact location of sites, before sending scuba divers down to verify the facts first hand.

Using this method the team re-discovered the wreck of The Dragon, a British West Indiaman ship that sank in 1757 along with its cannons.

The Dragon spent its life transporting goods between Jamaica and London and due to the threat from French pirates at the height of the Seven Year War; she was given a letter of Marque, allowing her to carry guns to protect herself and other British sailing ships.

When the wreck was discovered, lying beneath two metres of sand, the team had to wait for a big enough storm to shift the sand and expose the wreck and what turned out to be 13 big cannons.

However, as the Dragon should have only had 10 canons, Steve and his team believe there might be a second wreck in the same location.

They also found the wreck of the HMS Crown Prize, a 26 cannon British war ship, lost in February 1692 with the loss of 20 lives.

They also mapped the scattered remains of the wreck of De Boot, a Dutch East Indiaman sailing ship carrying a cargo of porcelain that went down off Prawle Point on November 8, 1738.

Only shards of porcelain from her cargo now remain among what is left of the wreck and a box of diamonds that was allegedly lost in the wreck has never been found, despite a great many diving expeditions with the goal of finding the loot.

The project also mapped for the first time the wreck of The Meirion, which smashed into Gara Rock near Prawle Point on its way from Sunderland to Bombay carrying a cargo of coal, in 1879.

The ship’s Captain William Williams was Court Marshalled and had his Captain’s license suspended for six months by the Board of Trade, for not controlling the ship properly and causing the loss of the vessel.

Some of the shipwrecks had previously been documented, including the Gossamer, and many others had been salvaged, but some had never before been found.

Steve said: ‘The drones meant we could locate potential sites from the air and photograph them underwater using a polaroid lens.

‘However, they are only of limited use. I have found many more potential wreck sites by using a magnetometer. That’s an instrument we drop into the water column behind the boat. It then takes magnetic readings which I plot.

‘Sometimes it can be an old discarded boat engine or other debris we find but, as in the past, it could also be a cannon or other important discovery.

‘We have discovered various cannon from the Dart entrance to Hope Cove and are still trying to tie them to specific shipwrecks.

‘Having taken readings using the magnetometer I then download the information onto a computer and spend hours and hours laboriously going over the data to decipher what we have, and identify any potential wreck sites.

‘I can then decide on which sites to put divers down to have a look and see if we have discovered another wreck site.

‘I have a good relationship with Reading, Northampton and Totnes Sub Aqua Clubs, which are all BSAC branches, and we have trained divers in marine archeology techniques so they know how to map a wreck site and how to look for and protect artefacts.’

He added: ‘I have a life-long passion for marine archeology. I have little interest in the wreck itself once we have mapped it and recorded where artefacts were found.

‘The joy is in the research that follows. Where the ship was made, what was its cargo, the journeys it made and most importantly of all, who captain and crew were and what happened to them.

‘For instance one of the 60 or so shipwrecks we identified in the Start Project, The Gossamer, which was a tea clipper that sailed between England, China and Australia and sank in 1868 with the loss of 13 crew and passengers, was captained by a John Thompson.

‘The month before The Gossamer sank he had time off to marry his fiancée, Barbara Kerr in Burscough, Lancashire.

‘He took Barbara on board so she could sail with him between London and Plymouth where he was to pick up passengers before setting sail for Adelaide.

‘Unfortunately The Gossamer ran aground and the captain dived into the raging surf in an effort to save his new wife, Barbara, who had been swept overboard. Unfortunately they both drowned and were later buried together at St Sylvester’s Church, Chivelstone.

‘Neville Oldham and I wrote a booklet about The Gossamer after researching the crew and passengers and what happened to them.

‘We visited graves and carried out extensive research looking at newspaper reports from the time, marine and museum records and the national archives.

Steve and Neville won the gold Duke of Edinburgh prize in 2014 for their Bigbury Bay Project, which concentrated on the search for the San Pedro El Major.

They were also jointly awarded the Highly Recommended prize for their Moor Sands Project in 2010 as part of the Southwest Maritime Archaeological Group, their HMS Venerable Project in 2011 and their Dartmouth cannon site project in 2012.

Video shows flying over the outlines of wrecks on the South Devon coastline, filmed by the Start Point Project team’s drone. The wrecks look a bit like rocks, but keep an eye out for the ’boat-shaped’ rocks. If that fails, some stunning shots of the coastline!